Heidolph Instruments is not about being the best, it's about being able to offer the best possible solution for our clients. Because our customers are at the center of all our decisions and thus influence our daily work. Nevertheless, we are naturally proud that we receive the recognition of our constant efforts not only in the form of high customer satisfaction, but also in the form of awards and certificates. 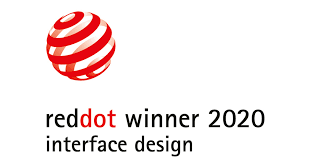 We are very pleased that our new generation of rotary evaporators, in addition to being named "Most Innovative Product" at the LLG Sales Convention 2019, was also able to convince the top-class international jury of the Red Dot Award with its intuitive and creative interface design.

The Red Dot Design Award is one of the most well-known and prestigious design awards worldwide. Among others, the jury of 24 experts awards the prize for the best creative performance in the world. In 2020, they chose Heidolphs rotary evaporators from 6,992 submissions as one of the awardees. The “research made easy”-principle also applies to the new user interface of the series of rotary evaporators Hei-VAP. The project convinced with its outstanding design quality and creative performance.

Uncompromising design quality
Based on the product design, functional glow effects and graphics with stylized light-refracting edges create a classy, emotional impression. The hardware’s functionality and design language are reflected in the UI design. A perfect interplay between digital and analog design guarantees a consistent appearance and an intuitive operation.

Optimal user navigation
The new user interface of the series of rotary evaporators Hei-VAP optimally guides the researchers. The greatest challenge: clearly visualizing the multitude of parameters and data – despite the small display. Glow effects emphasize the active areas on a graphical visualization of the instrument. An indicator in the UI design, which is based on the colors of the hardware elements, shows which hardware button controls which value. These are only some of the examples that show how the UI design optimally guides the user. The symbiosis of modern touch display and fast access control area with control knobs opens a wide range of possibilities inside the evaporation process to users. But it also ensures that a direct and fast process control for the most relevant parameter is guaranteed at all times.

Special thanks to our partners from UID for the outstanding cooperation.

LLG is the central organization of a group of 33 owner-managed laboratory distributors in Europe, Asia and Australia. As every year, the LLG organizes a sales convention in Mainz, where 100 manufacturers can present their current products and services to the specialist public.

This positive feedback from the visitors was also honored with the LLG Award 2019 for the Most Innovative Product. Heidolph's rotary evaporators prevailed over the products of 100 other exhibitors and were voted the most innovative laboratory product of 2019 by the visitors.

The new series scored particularly well due to the integration of modern operating elements and process-optimizing features (e.g. Dynamic AUTOaccurate mode for automatic evaporation). This enables intuitive operation and control of the devices, optimizes the processes in the laboratory and thus simplifies the everyday life of the users.

The series was developed in close cooperation with researchers from various universities and industries. Find out more at www.stories.heidolph-instruments.com.

We would like to thank our users for the excellent cooperation during the entire development process.

Since over 60 years the iF Design Award has been a global, recognized trademark for outstanding design achievements and thus one of the most important design awards in the world.

An international expert jury, had to decide from more than 5,000 submissions from 53 countries to award the coveted seal of approval.

So we're even more pleased that our Hei-TORQUE series convinced the prestigious jury and we have won the iF Design Award 2016 in the discipline of product design.

Special thanks to designship for the great collaboration!

In the golden mean: Ms Zinsser, owner of Heidolph Instruments - Flanked by the designers Thomas Starczewski, and Michael Fürstenberg

The quality and safety of our products have always been a part of our corporate strategy. A detailed quality management system (QMS) is an important basis for achieving and maximizing these goals. The ISO 9001: 2015 standard defines this basis and sets the highest standards for the quality of our products as well as for our services.

Why do we face this task and what does certification mean for our customers and partners?

As a manufacturer of premium laboratory equipment, we are committed to delivering the best possible quality to our customers. Only in this way can we ensure that the work of our customers also meets the highest standards. However, quality, robustness and precision are not the product of coincidence - but a result of many years of monitoring and the ambition to constantly call into question our own work.

The ISO certificate 9001 certifies us not only to implement these efforts, but also to implement them firmly in every step. A QMS according to ISO 9001 regulates all quality-relevant work steps and the respective responsibilities. In addition, certification requires a control loop that implements a continuous improvement process (CIP) in the spirit of continuous development and optimization.

For our partners and suppliers this means, that we will continue to expand our claim to quality assurance in the future and to optimize the processes at all touchpoints further. However, this does not just mean a commitment to our partners, but some well-defined goals that ensure transparency.   For our customers, renewed certification means they can continue to rely on our quality, reliability and fast service. Because all the steps and processes that are implemented in our quality management, always serve the customer, his needs and requirements.

We are proud of our employees who do not understand our quality management as a set of rules, but master the requirements of our products, every day anew with much satisfaction and further optimize. This passion, combined with the well-thought-out work processes, enables us to respond quickly to customer needs while always meeting the highest quality requirements. 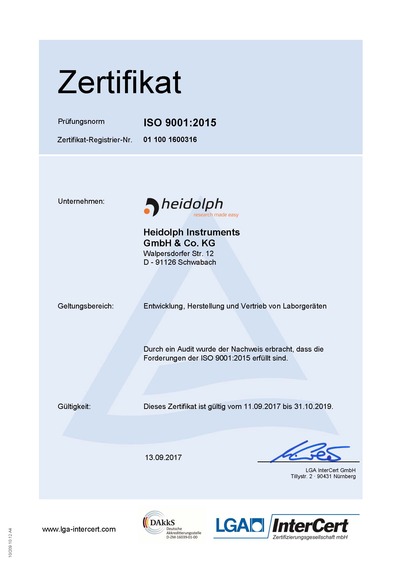 As a manufacturer of premium laboratory equipment, the fulfillment of the highest safety standards by our devices is always in our focus. But what would these high-end products from Heidolph Instruments be worth if we did not make the same effort to ensure the safety of our own employees?

We believe that we can ensure the long-term and comprehensive protection of our employees with only one system solution. With the Occupational Health and Safety Management System (AMS) of the BG ETEM, we are in the position for the third time in a row to have the implementation of these systematic preventive measures certified. Thus, our company Heidolph Instruments in Schwabach, as well as the branch in Kelheim, meet the requirements for a systematic and effective occupational safety based on the NLF / ILO-OSH 2001. Particularly mentionable is the practical relevance of the occupational health and safety at work rated. As a premium manufacturer, we can conscientiously fulfill our responsibilities without losing any of the agility and quality in the international market environment.

At this point, we thank Michael Friedrich and the entire professional association, for the very good cooperation over the many years. But we are also very proud of our employees, who do not see safety at work as an annoying set of rules, but are actively involved in protecting their health and the integrity of their colleagues every day 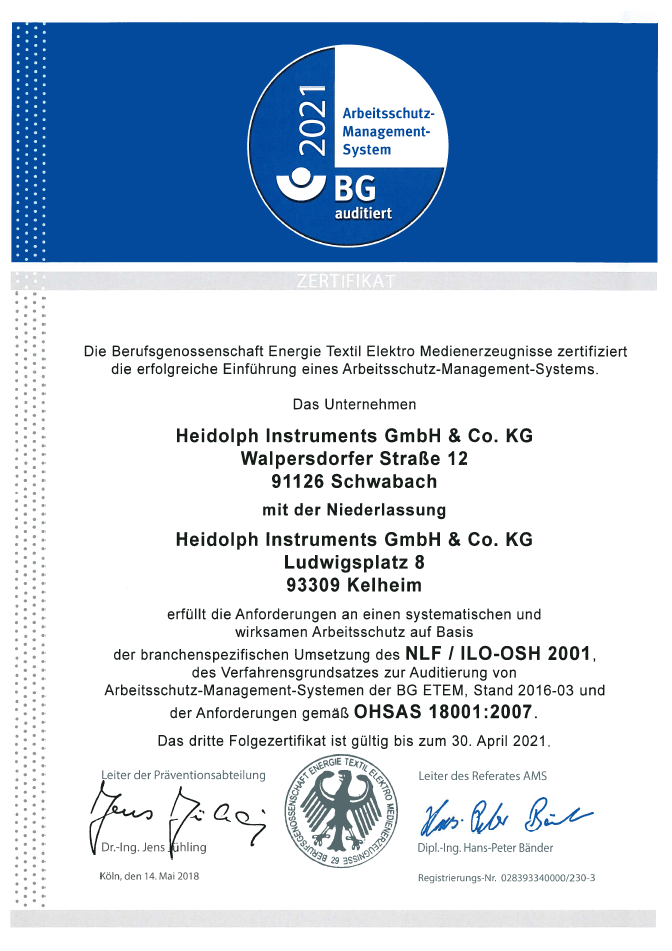 On the LLG SalesConvention Heidolph’s After-Sales Service has been awarded to be the best among more than 50 different manufacturers of laboratory equipment.

We are grateful and proud to see that these services are honored from our customers worldwide as well as from a huge number of experts in the laboratory field. Particularly we want to thank our employees and partners who maintain and exceed these standard by investing huge efforts and working with passion and enthusiasm on our “Research made easy” philosophy day by day.

HT-CON conducted its 3rd benchmark study in the summer of 2007. The goal of the study was to record and evaluate the customer orientation of more than 100 companies. The companies were selected according to their relation to instrumental analysis, manufacturers and suppliers of equipment, accessories and chemicals. The selected companies were subsequently evaluated on their web presence, as well as the reachability, reaction time and customer orientation via e-mail and telephone.

In this study, the customer orientation and the quality of contact of Heidolph Instruments was rated very good. That's why HT-CON ranked us second out of more than 100 analyzed companies. We are proud of our people in the service and sales departments who bring our company-wide customer-centric efforts to our partners, prospects and customers on a daily basis. We will continue to expand and optimize this customer focus and service concept in the middle of all departments in the company.